A Quick History of Independent Bottling

Despite the recent surge in independent botting, it is no modern phenomenon. Originally, distillers relied on these independent entities as their route-to-market. Some independent bottlers were merchants, with established ties to international trade. Some were bonders, who maintained large warehouses offering storage and security. And some were just good old-fashioned pubs and grocers.

One example is Mitchell & Sons. Initially established in 1805 as a confectioner, it wouldn’t be until 1886 that the family moved into the spirits trade. Although records show some Powers stock being purchased, John Jameson’s Bow Street Distillery would be their main client over the decades to come. It was through their storage and ageing techniques that the “spots” series came to life: they would mark each cask with a colour to denote its future bottling age.

Another company was W & A Gilbeys, famous for introducing Redbreast in 1912. Founded in London in 1857 as wine importers, they eventually moved into producing spirits. Within 10 years they had branches in Edinburgh, Belfast and at 46-49 O’Connell Street, Dublin: their new head office. The site was 4 stories in height, with a…

“large wareroom of wood, iron and glass…extending 200 feet to the rere..”

It is here where their wine and whiskey would meet. Their disgorged sherry casks replenished with John Jameson’s Bow Street distillate; Redbreast was born!

Despite these success stories, with so many individual quality control had become a persistent issue. Irish whiskey had reached astronomical levels of prestige, and unscrupulous actors weren’t about to hamper the global takeover of our distilling powerhouses. Powers were the first major producer to integrate in-house botting in 1886, with the introduction of the eponymous gold label as a seal of quality. Bow Street distillery wouldn’t bottle their own until 1968!

The formation of what is now Irish Distillers Ltd. would signal the end to the once prosperous age of merchant bottling in Ireland. The 20th century had been brutal to the industry, and tighter controls were required to weather the storm. With the latter half looking just as bleak, consolidation was the only option and supply was cut to the secondary market. Dublin’s once enigmatic John’s Lane and Bow Street distilleries ceased operations. As things slowed down a merger with Cork Distillers gave rise to the new Midleton Distillery – a little light in the darkness. With Bushmills still persevering up North, Midleton would be the only operating distillery in the Republic until John Teeling opens Cooley in 1987.

The decades that followed were long and harsh. Scotch had dethroned the Irish and was dominating the export market. In order to combat this our remaining distilling families had to work together. Collaboration was key, and with that, they embarked on an integrated system of production; sharing distillates, casks, bottling facilities and producing many blended brands otherwise not possible. A big effort – did it pay off? 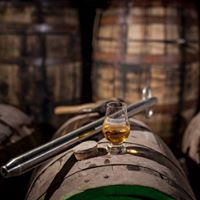 It was during this era that Indie bottlers enter our story. But these aren’t our local 19th century merchants doling out your usual dram. Modern-day incarnations come from all around the world, seek out specific casks, and cater to the curious consumer, the discerning drinker. Bringing unusual expressions not typically available from traditional portfolios. Where established producers will look to release consistent batches to a wide audience, (for newsletter): indie bottlers look to showcase the idiosyncrasies of select casks. They are disgorged directly from barrel to bottle. No filtration, no colouring, no added water. It’s as if you are in the warehouse sipping directly from the cask.

Have a look for Midleton, Cooleys and all the rest in our shop.