As we touched on last time, coopering is one of the oldest crafts in the world. Before plastic, ICBs and massive intermodal containers there was just one vessel in which goods were stored and transported around the world: the wooden barrel. To keep the burgeoning global economy running smoothly, coopers were employed around the world to create, repair and maintain these barrels. It was such a vital profession that any ship setting sail was required to have a qualified copper onboard. Today, the craft is still very much alive albeit on a more protracted level. Advancements in technology have resulted in better efficiency in production and less tennis elbow.

There are around 300 qualified coopers in Scotland. Down from a peak of 600 in 1990 but up from a low of 180 in 2005. Diageo, the second largest drinks conglomerate in the world, is responsible for producing more Scotch than anyone else. Annually, Diageo fills 400,000 barrels a year from their more than 30 single malt and grain distilleries. To mature this sheer volume, maintain quality, and mitigate spoilage, they run their own coopering academy. They currently have 16 apprentices in training, ensuring a steady flow of expertise and a continuation of tradition.

The industry as a whole rehoops and recharrs some 10,000 barrels every year. Scotland is home to some of the oldest casks in the world. While this provides some of the richest profiles in whisky, maintenance and repair is required on a daily basis. The tradition of ageing in fortified wines such as sherry and port brings even greater challenges to the coopers. Due to the ageing processes of some of the wines previously held the barrels that arrive in the cooperages could be over 100 years old. Great potential to create a delicious whiskey and turn a profit, but greater risk of spoilage and spillage. 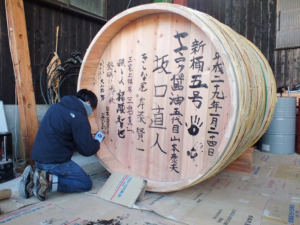 All the way across the world in Japan, coopering was treated with the same reverence and care as their famous knifemaking. Similarly to the rest of the world, Japanese coopers have crafted barrels of all shapes and sizes; they have held everything from beer to rice and grain. These coopers used traditional tools and techniques formed over centuries.

They also had different wood species to work with, alien to the majority of the world. Mizunara, or Japanese Oak, lends a lot of sandalwood and coconut. Kuri, or Japanese Chestnut, leans heavier into creamy dessert sweetness. Hinoki, Japanese Cypress, delivers smoky, citrus aromas and Sakura wood, a cherry blossom-like flavour.

There is another unique feature to the island nation: the koike. These are huge wooden barrels traditionally used to store and ferment soy sauce, miso, pickles and sake.

Staves are cut from Sugi or Yoshino Cedar, an evergreen tree, creating a barrel of 3600ltr. Instead of iron hoops, the barrel is instead held in place by a rope made of bamboo. Post World War II, modernisation saw this traditional wooden barrel replaced by steel. Today, less than 1% of soy sauce is fermented in this way. However, a resurgence of the craft has emerged from its birthplace of Shodoshima. The tenacious islanders have begun a school and tourist attraction to revive and pass-on the tradition to future generations.

The story of the USA is intertwined with it’s national spirit of choice: bourbon. Strong, sweet and spicy, it truly represents the tumultuous origin story of the nation. The story of bourbon starts with the Ulster Scots. Originally from Scotland, they migrated to Ulster and then onto the great frontiers of America. Seeking religious freedom and new land, they ventured further afield from The Thirteen Colonies in an area known today as Appalachia. They brought their knowledge of distilling and found that their distillate, the potent potable, made excellent currency to trade with Natives. Finally arriving in Kentucky, with its lush cornfields, rich soil and hot weather, the Ulster Scots declare The Bluegrass State the epicentre of American distilling.

Unlike other whiskey categories, bourbon must only be aged using “charred, new oak”. This is thanks to the timber industry lobbying congress to protect jobs and revenue. Today, there are over 45 cooperages and stave producers registered in the United States. Over two million barrels are produced every year in Kentucky alone with Brown Forman (Jack Daniels) producing nearly 5000 barrels a day. This is the world’s barrel factory, growing year-on-year as demand for ex-bourbon casks from all corners of the map increases with the arrival of ‘new world’ whiskey. These cooperages are all about production, with an operational style akin to a manufacturing plant. In comparison, cooperages in Ireland, Scotland and Japan would dedicate the majority of their time monitoring, maintaining and repairing old weathered casks. 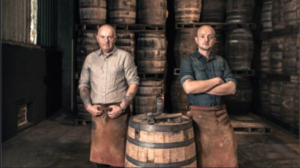 Ireland’s story is yet to unfold. With just a handful of distilleries producing enough liquid to warrant the hiring of an in-house cooper it may take some time before we have our own industry similar in size to the rest of the world.

There are, however, some signs of growth. Midleton Distillery, famous for its brands Jameson, Powers and Redbreast, hired their first cooper in 40 years. Killian O’Mahony spent four years working under master cooper Ger Buckley so should bring some real expertise to the Midleton maturation process. From one to two, the new Tullamore Dew Distillery has hired it’s second apprentice this year, with parent company William Grant & Sons having built their own on-site cooperage.

Nephin Distillery have taken a different route and employed the services of master cooper John Neilly. John Neilly had worked in Scotland for decades before moving back to Ireland and now runs his own shop in Co. Mayo. Bushmills have a blend of the apprentice and the master with a father & son team Alistair and Chris. Four generations of the Kane family now manning the ship since 1935.

Ireland has now gone from having 6000 coopers to 6. We hope this figure has bottomed out… and are bullish on an uptick in the very near future.