You probably haven’t ordered one at the bar before, but one way or another you’ve tasted sherry. Be it in a cocktail or Irish whiskey, the Spanish wine is paramount to a delicious drinking experience. You may not, however, have realised yet.

Luckily, we have the whiskey part covered. That’s because sherry has an important role to play in Irish whiskey. So we’re paying tribute today to Spain sryup-iest drinking delight in order for you to get a more well-rounded appreciation for Irish whiskey. And also because the history and the science behind it is pretty cool.

Most whiskey is matured in either an ex-bourbon barrel, an ex-sherry butt, or a combination of the two. With the ex-bourbon cask, we expect a punch of coconut, vanilla and intense wood spice. The ex-sherry cask however, will typically mellow out a spirit, imparting deeper notes of dried fruit, nuts, and with older expressions, rich tobacco and leather. Pretty intriguing, right? Including a sherry butt in your maturation profile will give your whiskey a really interesting depth of character.

But what about the liquid itself? Where does sherry come from and how did it become so intrinsic to whiskey maturation?

The early history behind sherry is as rich as the flavours it imparts. First mentions of the fortified wine appear over 2000 years ago in the writings of a Greek geographer named Strabo. He detailed the journey taken by the Phoenicians from Lebanon to Spain some 1000 years before. The Phoenicians were seafaring mercantilists, commanding an empire across the Mediterannaean. In 1104 BC they arrived on the shores of southern Andalucia, founding the port city of Cadiz, which to this day, is Spain’s oldest inhabited city. They also loved a drink. These guys were highly skilled in the craft of viticulture and winemaking. The surrounding area with its rich soil and good drainage was transformed by The Phoenicians into rolling vineyards that would eventually produce the wines of Jerez.

In the 21st Century sherry, or ‘vino de Jerez’, is hugely important to the culture and economy of Andalusian Spain. Of the 37,000 hectares that cover the autonomous community, nearly a third is dedicated to grape production, cultivated by over 2,000 family-run farms. Therefore protection of the wine is of the highest importance to Spaniards. Similar to wine, cheese, and of course, Irish whiskey, specific rules and regulations are adhered to when making sherry. 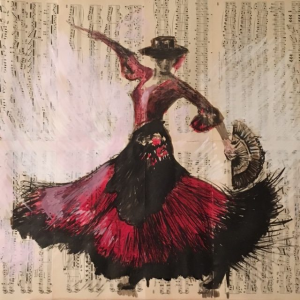 When we speak of ‘sherry’, we are typically referring to a group of wines grown from the palomino fino grape, produced in an area surrounding three towns; Jerez de la Frontera, Sanlúcar de Barrameda, and El Puerto de Santa Maria. The wines produced here range in flavour profile from bone dry in the case of the manzanilla style, to the richer, darker oloroso style. These wines are all aged for various periods depending on what style the capataz desires. As a general rule, only grapes produced in this region, known as the ‘Marco de Jerez’ are destined for sherry wine production. One exception to that rule however is Pedro Ximenez.

Anyone who loves a rich and sweet whisky or a treacle-like dessert wine will know about Pedro Ximenez. PX sherry is the most viscous and the most sweet. It is often eaten on top of vanilla ice cream in the place of a sweet syrup. The grapes are tricky though.

Prone to rot under cooler conditions, the coastal climate of Cadiz, the traditional sherry region, proved too much for the thin-skinned pedro ximenez grape. Despite being the dominant grape of the Jerez region historically, the variety now grows in Montilla-Moriles, a warmer, dryer region 250km inland. Unique to the PX style, once the grape is harvested, it goes through an additional, labour-intensive process known as asoleo. Basically, the grapes are sun dried into raisins, or pasas, a practise brought to the Iberian peninsula by the Moors. To acquire the ‘vino de jerez’ designation, the tarlike juice extracted from the pasas is transported to the region of Jerez where it will undergo ageing in an area called the Sherry Triangle. 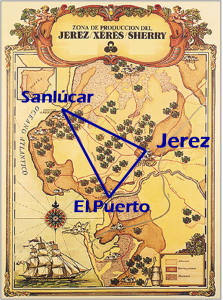 Where the Marco de Jerez defines the area for sherry wine production, the Sherry Triangle concerns itself with storage and maturation. To qualify as a vino de jerez, the wine must be aged in bodegas, or cellars, that are situated within strict city boundaries of the three main aforementioned towns (Jerez de la Frontera, Sanlúcar de Barrameda and El Puerto de Santa Maria). These bodegas are monitored by regulators to ensure traditional practises and standards are adhered to. There exists a sort of tribalism between the towns of the Sherry Triangle.

Jerez de la Frontera undoubtedly is the epicentre of the sherry industry, home to the most prosperous bodegas and figures. Sanlúcar is quite the opposite. It’s homegrown style of manzanilla incessantly challenged as not real sherry by the upper echelons of the Jerez aristocracy. El Puerto, once the capital of the fino style of sherry, has suffered a decline in production over the centuries. The town however linked its coastal cuisine and wine, with many Michelin star restaurants to enjoy along the coast. So each town has something different to offer.

The third and final ‘vinoz de sherry’, Moscatel, is produced from a variant of the Muscat grape family. Believed to originate from ancient Egypt, Muscat is considered one of the first grape ever varieties to be turned into wine. Grown primarily in the sandy seaside soils of Chipiona, it accounts for just 2% of the region’s entire sherry production. The resulting profile is sweet, savoury and floral – bridging the gap between the classic dry-style sherries of Jerez and the treaclesque style from the Pedro Ximenez grape. If there were a black sheep in the sherry family, it would be Moscatal, nonetheless, there are some spectacular expressions worth seeking out. 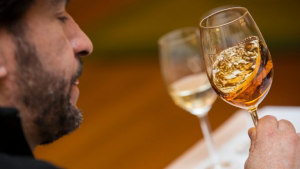 Growing Up Alongside Whiskey

Obviously at Irish Spirit we are more interested in whiskey than drinking sherry but we do have a vested interest in the Spanish wine because of how interlinked the two drinks are. We’ll go into more detail on that in our blog next week.