At Irish Spirit our mission is to tell the stories of Irish Whiskey. Today we look at the legend that is Bushmills Distillery.

How different was the 17th century to the 19th? Well, in 1604 Shakespeare was still alive and Othello had its first recorded performance. In 1824, Charles Dickens was alive – though only 12 and working in a boot blacking factory. Although they have updated their methods and practises since 1604, Bushmills work continuously to make perfect spirit consistent with that Shakespearean time. 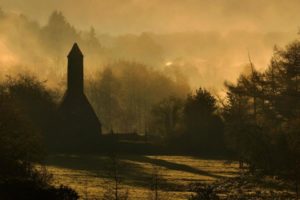 Part of that process is an almost spiritual devotion to single malt.

Single malt, made from barley. Standard practice in Scotland, where over almost all distilleries will use this recipe. Which is well over 100 distilleries. However this grain is not so commonly used in Ireland. When it is so successful, why don’t we use it?

In short, because of 19th century taxes. In the mid 1800s the Crown began demanding a much larger tax on barley. It is believed by many that this was, in reality, a tax on whiskey. By this point in time, while Dickens was writing his stories, people and goods were travelling farther and word had got out across the world that malted barley made the best whiskey. Whisk(e)y was getting more and more successful and inevitably a tax was drawn up.

This changed the face of Irish whiskey forever.

Many distillers, most of them farm distillers, were forced to change the raw ingredient to their spirit. To this day we have the alternative recipes and inventions of the time period, such as pot still whiskey. More on this subject here (click here).

Bushmills, however, managed to keep on using malted barley despite the rise in cost. Their devotion to create what they thought was the best Irish whiskey was extremely strong. They have carried this belief through to the 21st century. Colum Egan, their Master Distiller, is quoted as saying:

WE’RE NOT GOOD BECAUSE WE’RE OLD,

Bushmills today makes for quite an exciting picture. The distillery uses a mix of modern technology and old recipes. The water still comes from the old Saint Columbs Rill, a tributary of the River Bush. The casks come from all over the world.

Take for example their 2021 Causeway Collection. 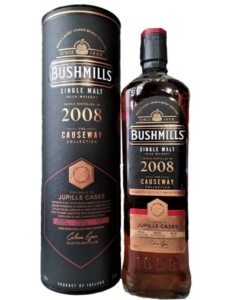 The iconic Bushmills Single Malt has been matured in a number of interesting and delicious casks. For example, ruby port casks from Portugal for one bottling; madeira casks from the island of Madeira, again in Portugal, for another; and Jupille casks, a very obscure French oak barrel produced from the Jupille Forest near the Loire Valley, for another.

If you would like to check out that Jupille Bushmills then have a look here (click here).

If you haven’t met the Bushmills before then hopefully we have given you a taste of this legendary distillery. The rest of your Irish Whiskey journey lies before you…